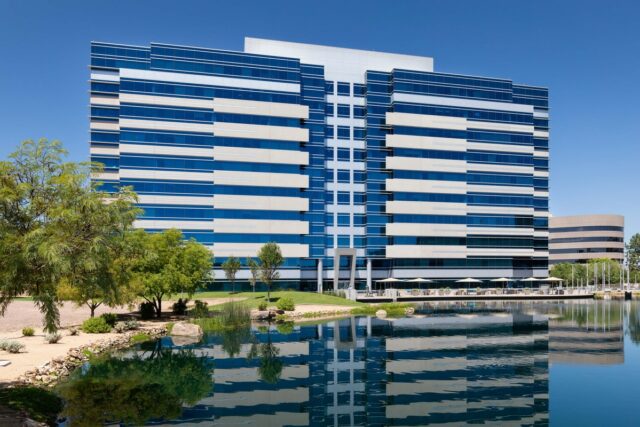 KBS Real Estate Investment Trust II, a publicly registered non-traded REIT, has sold Fountainhead Plaza, a two-building 446,000 square foot office property located in Tempe, Arizona, for $117.5 million, according to a filing with the Securities and Exchange Commission. Shorenstein Properties, an unaffiliated third-party, was the buyer.

KBS REIT II purchased the Class A property in September 2011 for approximately $136 million. The property was sold as part of the company’s liquidation plan that was approved by shareholders in March 2020.

Fountainhead Plaza sits on more than 11 acres of land and includes a six-story standalone parking facility. The LEED Gold certified six- and 10-story office buildings have floor plates averaging approximately 28,000 square feet, as well as onsite amenities that include a café, a fitness center with showers and lockers, and an outdoor gathering area surrounding a pond.

In connection with the sale, KBS REIT II paid down $61.5 million of the principal balance due under its portfolio loan facility.

In addition, the board authorized a fourth liquidating distribution in the amount of $0.50 per share to stockholders of record as of the close of business on October 1, 2021.

The distribution will be funded from proceeds from the sales of Fountainhead Plaza and Granite Tower, an office building located in Denver, Colorado that was sold in early September for $203.5 million. The company expects to pay the distribution on October 5, 2021.

KBS REIT II closed its primary offering in December 2010 after raising approximately $1.8 billion in investor equity. As of June 30, 2021, the company owned four office properties and an office building that is part of an office campus.