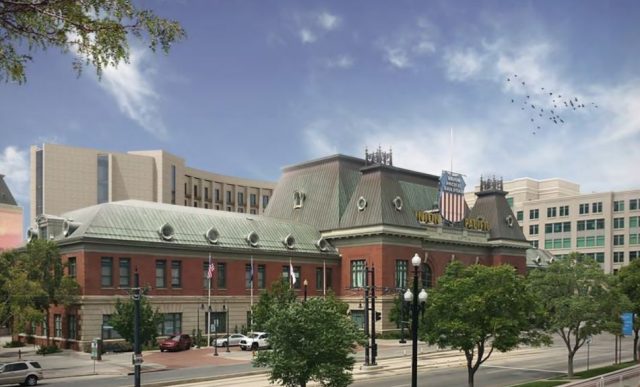 Hatteras plans to convert and expand a Union Pacific train depot and also construct a new eight-story tower into a mixed-use property with a 225-key hotel, 10,500 square feet of retail, and a 17,000 square-feet Live Nation event space.

Hatteras Sky is co-developing the hotel with Scottsdale-based The Athens Group, which has delivered several resort communities and hotels in California, Hawaii, and other locations.

Constructed in 1909, the Union Pacific railroad station features original frescoes depicting the driving of the Golden Spike at Promontory Summit and the arrival of Mormon pioneers. It is located across the street from the Vivint Smart Home Arena, which is home to the NBA’s Utah Jazz, and the TRAX Blue and Green light rail stops.

“We are excited to partner with [The Athens Group] on this project. Salt Lake City has exhibited great economic development in recent years, placing it as one of the top cities in the country for employment and population growth,” said Oz Friedmann, managing director of development for Hatteras Sky. “This project will be a marquis asset for Salt Lake.”

“We aim to give investors a straightforward investment opportunity that avoids a lot of the complexity that pundits focus on when discussing the opportunity zone incentive,” said Jason Cordon, co-founder and CEO of Hatteras Sky. “First, it’s a single asset fund. We anticipate starting construction in a few months, so a lot of the timing and ‘deployment’ issues in the law are not really present.”

The investment is being offered through Cabot Lodge Securities and is available to accredited investors.

Hatteras Sky is a commercial real estate development company based in Atlanta, Georgia that specializes in tax-incentivized and conventional development, focusing on opportunity zones, affordable housing, and historic rehabilitation.