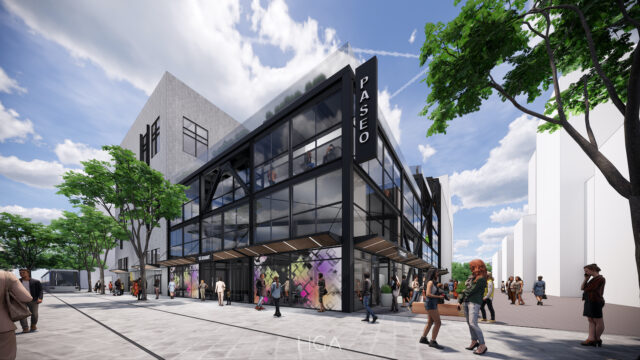 Urban Catalyst, an opportunity zone fund sponsor that focuses on ground-up development projects in downtown San Jose, has closed on its senior construction loan and pulled a building permit for its downtown Paseo project to convert the shuttered Camera 12 theater into 100,000 square feet of mixed-use office and retail space.

The Paseo project is the first of six from Urban Catalyst to begin construction this year, with construction expected to conclude in July 2022. The $56.2 million loan is through Rialto Capital.

Located at 201 S Second Street in downtown San Jose, the three-story structure–closed since 2016–is being converted into 75,000 square feet of Class A office space on two floors over 25,000 square feet of ground floor retail. Urban Catalyst said that the former theater’s high ceilings will enable such features as “floating” conference rooms, mezzanine levels and catwalks that lead to rooftop gardens.

“The Paseo de San Antonio is becoming a ‘restaurant row’ and we plan to add to it with some amazing ground floor retail spaces,” said Erik Hayden, founder and chief executive officer of Urban Catalyst. “Bringing this mix of new retail and office into a long-shuttered building is the very definition of urban revitalization.”

The company noted that retail businesses that have expressed interest in leasing space include several full-service bars and restaurants.

“We are almost 100 percent leased on the entire retail portion of this project in one of the most dynamic neighborhoods in the city,” said Josh Burroughs, partner and chief operating officer at Urban Catalyst. “The leasing interest has just been phenomenal and speaks volumes to the strength of downtown and this prominent location.”

The project was designed by local architects HGA & ArcTec, and the general contractor for the project is Swenson Builders. Post construction, the office and retail will be property managed by MCM Diversified.