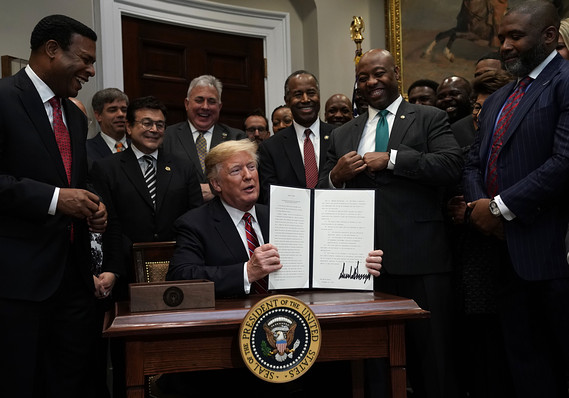 President Donald Trump has signed an executive order establishing a White House council that will determine how to use taxpayer dollars to revitalize low-income communities, including qualified opportunity zones.

The federal opportunity zone program was established as part of the Tax Cuts and Jobs Act of 2017 and offers capital gains tax relief for new investments in certain economically distressed areas nationwide that are designated as qualified opportunity zones. The Treasury Department has estimated that private businesses will invest $100 billion in opportunity zones.

The new White House Opportunity and Revitalization Council will be chaired by Ben Carson, the Secretary of Housing and Urban Development, and will include the heads of 13 federal agencies, including Treasury secretary Steven Mnuchin and Commerce secretary Wilbur Ross.

“With the creation of today’s council, the resources of the whole federal government will be leveraged to rebuild low-income and impoverished neighborhoods that have been ignored by Washington in years past,” said President Trump. “Our goal is to ensure that America’s great new prosperity is broadly shared by all of our citizens.”

The council plans to streamline, coordinate, and target existing federal programs to economically distressed areas, and will consider legislative proposals and regulatory reform to remove barriers to such revitalization efforts, according to a statement from the White House.

There are currently 8,761 designated opportunity zones in the U.S. and its five territories that nearly 35 million Americans call home. The average poverty rate in these areas is 32 percent, compared with the national rate of 17 percent.

“For decades, job growth and investment have been concentrated in a few major metropolitan areas. This has created a geographic disparity — a very big one, in many cases — where some cities have thrived, while others have suffered chronic economic and social hardship,” said Trump. “With opportunity zones, we are drawing investment into neglected and underserved communities of America so that all Americans, regardless of zip code, have access to the American Dream.”

The White House Opportunity and Revitalization Council will terminate on January 21, 2021, unless extended by the President.