Home News Sponsored: Now That Oil Has Moved Above the “Right Price,” How Much... 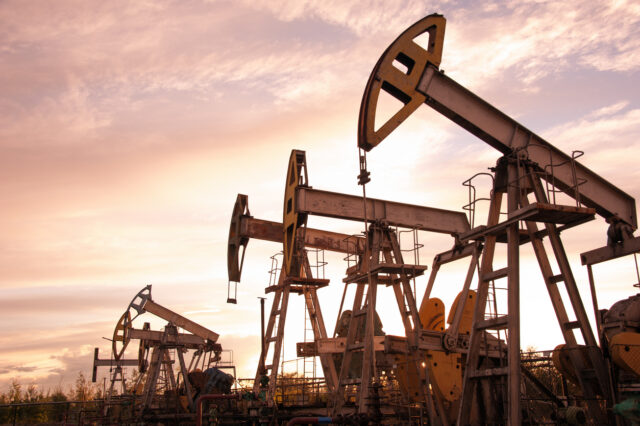 Back in September 2020, The DI Wire published my article on why I thought the oil sector was moving into the recovery phase.  I made what appeared to be bold statement at the time, when crude oil was trading at less than $40 per barrel, that West Texas Intermediate (WTI) would move back to the “right price” of $65 per barrel by June 2021.  I also said, “Add in a large helping of inflation created by the global pandemic stimulus package(s), and $75 per barrel WTI is easily within range.”

Either I Am Very Smart or Very Lucky; Probably the Latter

On July 9th, the front month NYMEX futures contract (AUG21) closed at $74.62 per barrel after spiking to $76.89 per barrel on July 6th.  Big spikes in any asset class, especially a commodity as important as oil, are caused by paradigm shifts, and we had a whopper of one in the second quarter.

A paradigm shift, a concept identified by the American physicist and philosopher Thomas Kuhn, is a fundamental change in the basic concepts and experimental practices of a scientific discipline. Even though Kuhn restricted the use of the term to the natural sciences, the concept of a paradigm shift has also been used in numerous non-scientific contexts to describe a profound change in a fundamental model or perception of events.

At the beginning of the year, Wall Street believed that the world had plenty of oil (the consensus paradigm).  Six months ago, the word “glut” seemed to appear in every article I read about the global oil market.  Add in the media propaganda that the “Green New Deal” had already pushed us past peak demand, and many investors considered the oil and gas sector uninvestable.  Wall Street believed that upstream oil and gas companies were part of an old industry that would never be profitable again.  Now, the energy sector is the top performing sector in the S&P 500 Index.  Energy Prospectus Group’s Sweet 16 (my top picks) were up 125 percent year-to-date at the close on July 9th.

Surprise: The Experts Were Wrong Again

The seeds for the paradigm shift were planted in April when Goldman Sachs forecasted that Brent, the global oil price benchmark, would ramp up to $80 per barrel by the end of the third quarter.  The price of oil was in the low $50s when they made the bold forecast.  Goldman Sachs is a leader of the Wall Street herd, so other highly respected firms started to dig deeper and what they found was that the global oil market was quickly heading toward being short oil.

Just as I told you back in September 2020, oil demand has been exceeding supply by well over a million barrels per day for over 10 months, and the gap is widening.  On July 8th, The U.S. Energy Information Administration (EIA) reported that U.S. crude oil inventories had declined by 22.2 million barrels during the three weeks ending July 2nd and were 7 percent below the five-year average for that date.  One of the world’s most important commodities going quickly from a “glut” to a shortage is a BIG paradigm shift. 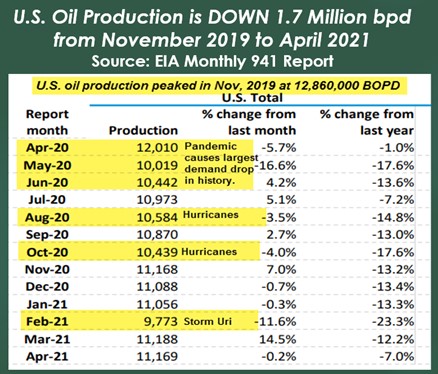 Back to the Big Question: How High Can Oil Prices Go?

My forecast is that WTI will soon be over $80 per barrel and the stars are aligned for the price to go over $100 per barrel before year-end.  The “glut” is over, and this world is going to need every drop of oil that the OPEC cartel and Russia can come up with by the end of the third quarter.  At some point in the near future, the price of oil will need to move high enough to curtail demand.  That price is probably over $100 per barrel.  The only thing that I see today that can keep much higher oil prices from happening is another surge in Covid deaths.  That risk seems to be very low in the countries which have ample supplies of vaccines.

Eventually mankind will transition away from hydrocarbon-based energy sources, but the trifecta of wind, solar and electric vehicles is not going to cause demand for oil to decline until well beyond 2030.   Demand for oil is tied directly to global population growth, gross domestic product growth, and our desire to have a high standard of living.

I founded the Energy Prospectus Group in 2006 with the mission to help our members make wise investment choices that have the potential for market-beating results.  Go to this link for more information about what we do: https://energyprospectus.com/member-benefits/

If you would like to become a member of the #1 networking group for investors serious about making money in the energy sector, send me an email at energyprospectus@gmail.com.