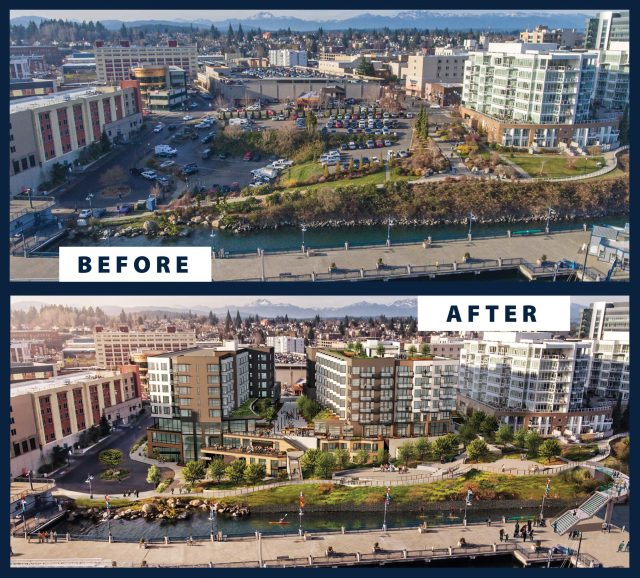 Sound West Group, a Seattle-area developer and asset manager, has launched their opportunity zone project development called Marina Square, a mixed-use waterfront development in the Seattle suburb of Bremerton, Washington that will include multifamily and hospitality properties, as well as paid parking.

The Marina Square project will include a 125-room hotel tower by Cambria Hotel, an upscale brand affiliated with the Choice Hotel Group, that will include a waterfront restaurant, bar, fitness center, market, and conference center. Sound West noted that each room will include a view of the water, marina, and mountains.

The company is also developing a separate 145-unit apartment tower with amenities that include a rooftop deck, private clubhouse, business center and lounge. Both towers will sit atop a subterranean, paid-parking garage with 382 parking stalls.

The company said that Marina Square is one of the first project-specific qualified opportunity zone projects of its kind in the country.

“Seattle’s employment and population boom has resulted in a housing shortage as well as one of the country’s most significant cost of living increases. The Bremerton area (the project location), has seen dramatic increases in population and housing demand, creating a great need for all three asset classes associated with our project,” said Sound West CEO Wes Larson.

He added, “I was born and raised here. For me, it is particularly gratifying to deliver a significant development to the region that will not only benefit our project investors, but will focus on honoring the spirit and intentions of the federal opportunity zone initiative by helping to create jobs and opportunities, increasing local revenues and wealth, and supplying the much needed housing for the area.”

Bremerton recently added a 28-minute commuter ferry to downtown Seattle from a terminal situated approximately 500 feet from the Marina Square project, while the U.S Navy has committed to invest in the Puget Sound Naval Shipyard located steps away from the project site, as part of its $21 billion ship repair yard modernization plan.

“This is an exciting project within one of the state’s designated opportunity zones,” said Greg Genovese, president of Sound West Realty Capital. “The Sound West Group is taking a parking lot and transforming it into its highest, best use, while also improving the community for the long-term.”

Sound West Realty Capital is the securities arm of Sound West, and industry sources expect the company to launch a private placement opportunity zone fund in the near future.

Sound West Group is a full-service real estate company that encompasses property development, asset management, commercial and residential property management, and brokerage. The company said that it is a leading developer in the region with a total stabilized value of over $300 million, and an additional $300 million currently in design and development.