Both traded and non-traded real estate investment trusts made gains in the third quarter of 2021 as markets has recovered from the toll COVID-19 took on real estate securities in 2020, according to investment bank Robert A. Stanger & Company.

Non-traded net asset value REITs posted a record 7.24 percent return for the third quarter as measured by the Stanger NAV REIT Total Return Index, which recovered to its pre-pandemic level during the third quarter of 2020 and has since set a record each quarter.

According to Stanger, the graph below illustrates the impact that stock market volatility plays in traded REIT securities values relative to non-traded REITs.

“This performance highlights the benefits of a non-listed NAV REIT vehicle, that historically has provided a mostly steady real estate-based return without the extreme ongoing volatility of the traded market,” said to Kevin Gannon, chairman and chief executive officer. 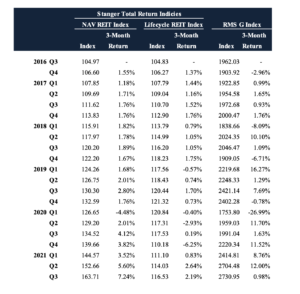 The Stanger NAV REIT and Stanger Lifecycle REIT Total Return Indices measure the performance of non-traded REITs on a quarterly basis. Stanger began calculating the indices on December 31, 2015, with a base level of 100.

All NAV REITs with a minimum of one calendar quarter of performance are included in the NAV REIT Index. Traditional lifecycle REITs are added to the Lifecycle REIT Index in the quarter that their first NAV is announced and are removed from the index upon listing, merger, or in the case of a liquidation by sale of properties, upon conversion to a liquidation basis of accounting.