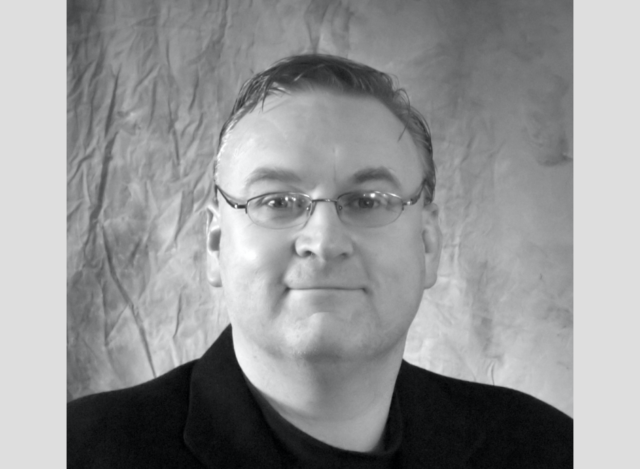 For those of you with clients who are invested in upstream energy, it has been a choppy ride. From 2010 through most of 2014, oil prices settled in at $80-100 per barrel (bbl), which was a welcomed development given where prices were during most of the Great Recession. From 2015-2016, however, $50 bbl became the new normal, which lead to a wave of oil/gas bankruptcies and a reexamination of lending practices by energy lenders. Better times settled in momentarily in 2018, followed by a global pandemic and ultimately a regression to the mean of $50 bbl at year-end 2020.

Are better times ahead? We hope the following market commentary will shed some light on the topic.

Three Cycles in One

Since 2005, oil and gas pricing has moved like a roller coaster. Unfortunately, this has worked to the peril of many E&P companies whose cap. ex. spent was relational to the higher prices of the underlying commodities (i.e., as the costs for energy assets and drilling services move in positive correlation with oil/gas prices). The cycles of the past decade are summarized below:

Market experts, including Goldman Sachs and Raymond James, are predicting a continuation of better pricing for oil/gas. As to natural gas, both firms are bullish on pricing for 2021 based upon anticipated reductions in drilling cap. ex. within major U.S. fields, which has led to a substantial reduction in the U.S. rig count. While most of these rigs are deployed within fields whose economics are driven primarily by oil (e.g., Permian Basin), less drilling for oil means that less associated natural gas will be produced.  In view of a lower expected level of associated natural gas production, both Goldman Sachs and Raymond James have suggested the possibilities of $3.00 mcf through much of 2021 (but with natural gas expected to settle back to pre-COVID price levels in 2022 upon a rebalancing of market supply/demand for oil).

While oil is expected to move upward, the climb is expected to be slow rolling as worldwide GDP and associated oil demand are not expected to return to pre-COVID19 levels until 2022. For this reason, Raymond James forecasted a moderately higher WTI price average of $57 bbl in 2021 as a result of a gradual reopening of worldwide economies and OPEC/Russian cooperation in continued production cuts. Raymond James anticipates oil pricing of $65 bbl in 2022 based upon a rebalancing of oil supply/demand.

While the above-mentioned sentiment gives us pause for hope, higher oil prices will require an economic re-normalization that depends upon the widespread availability of a COVID-19 vaccine for billions across the world. Taking a more conservative approach, the Energy Information Administration (EIA) projects the Brent crude spot price to average $53 bbl in 2021, which compares favorably to the average of $42 bbl in 2020.  This forecast, which is driven by the EIA’s expectation for a GDP increase of 4 percent in 2021, implies an average WTI spot price around $50 bbl for this year. The EIA also anticipates natural gas pricing of about $3.00 mcf through much of 2021.

Where is the activity today?

OPEC was cooperative at keeping its output in check, as evidenced by its willingness to cut its production to 25.6 million BOPD in 2020. Recently, the U.S. petroleum industry also curbed its drilling activities, with the number of on-shore U.S. rigs decreasing from 772 a year ago to 359 rigs today. 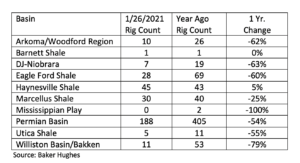 While few U.S. basins have been immune to activity reductions, we note that the Haynesville Shale and the Marcellus Shale Plays fared better than the major oil producing basins in terms of their activity declines. This appears to be linked, in part, to a generally bullish outlook for the prospects of natural gas in 2021, coupled also with emerging opportunities in the U.S. to export liquid natural gas (LNG) abroad.

Warning – US production can turn on a dime

Despite the sentiment for better oil pricing this year, a stable market commands a worldwide supply/demand balance. A potential disruptor to this equation is that the U.S. drilling industry can drill and operate wells at lower break-even prices as compared with its OPEC counterparts. In contrast to the fiscal break-even prices of many OPEC countries that range within a $60-100 bbl pricing level, U.S. oil producers operating in the Permian Basin, Eagle Ford, and other basins can drill economic wells within a $45-50 bbl pricing level, while breaking even from a post-drilling operational perspective at $20-30 bbl. A table that illustrates the break-even for drilling and operating wells within the above-mentioned fields is provided below (reported on a “per bbl” basis):

In a recent survey conducted by the Federal Reserve Bank of Dallas that included about a hundred executives from various E & P companies, about 50 percent expressed their intentions to ramp up their drilling capital expenditures this year under the belief that oil prices will fall within a range of $40-50 bbl this year. As such, the ability of the world oil market to return to better pricing could be thwarted by the desires of U.S. producers to achieve profits through drilling in 2021/2022.

As was the case a year ago, oil pricing remains a wildcard for 2021.

On the positive side, respected energy finance firms are optimistic about the prospects for better oil prices. While the sentiment of the broader NYMEX oil futures market is more pessimistic than that of Raymond James and Goldman Sachs, NYMEX expectations also bode favorably when compared with the average oil price realized last year. The uncertainties surrounding a full-scale return to pre-COVID economic conditions, coupled with the question as to whether U.S. producers will keep their feet off the pedal long enough to allow the world’s supply and demand fundamentals to rebalance are undoubtedly the wildcards this year.

Despite the uncertainties, there are areas in the U.S. where oil/gas can be profitably developed and/or produced at low break-evens. As such, drilling and other E&P focused investments will continue to present viable opportunities to investors in 2021. However, cautious underwriting is key, as it is important to understand the break-evens of projects given their locations and corresponding challenges.  Pro formas must factor relevant commodities pricing discounts based upon local supply/demand and available infrastructure. Additionally, special cost related considerations, such as water disposal, sponsor/manager compensation, and load must be built into the economic underwriting models.

While the press has historically favored the Permian and Eagle Ford, remember that there are core and non-core areas in all popular plays. This is another area where the value of independent project underwriting comes into play.

Brad Updike joined Mick Law in August 15, 2006, and his areas of practice include securities law, oil/gas, private equity, QOZ, DPP due diligence, taxation analysis relating to securitized financing and securities advertising practices. His work focus over the past 15 years has involved underwriting and due diligence of DPPs that raise investor capital for oil/gas and alternative projects; which includes reviews of roughly 500 offerings that raised approximately $10 billion in retail capital for drilling, royalties, lease banking, infrastructure, service company support and renewable energy (i.e., solar, micro-grids). His work has also included opinions involving various federal income tax issues for securities financings (e.g., 1031 treatment of TICs and royalty direct title offerings, qualified dividend treatment of preferred stock offerings, usage of UBTI blocker entities in oil and gas offerings, and tax opinion on conservation oriented real estate projects). He received his J.D. Degree from the University of South Dakota School of Law in 2000, and he received his Master of Laws (LLM) degree in Taxation from the University of Florida School of Law in 2006.