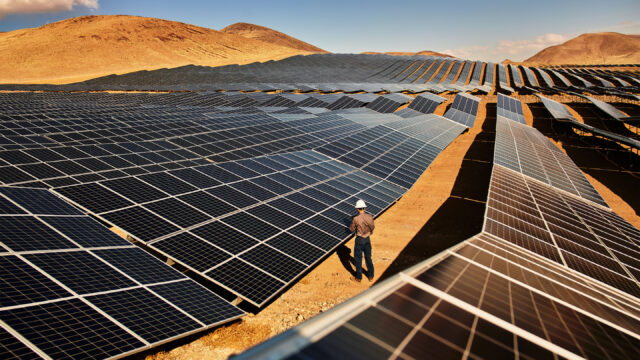 Greenbacker Renewable Energy Company, a publicly registered, non-traded limited liability company and manager of sustainable infrastructure investments, reported that its Turquoise Solar Project, the largest operating solar project in its portfolio, has been completed and is supplying renewable energy to Apple’s data center in the Reno Technology Park in Washoe County, Nevada.

McCarthy Building Companies’ renewable energy and storage group recently completed construction of the Turquoise Solar Project. The 61-megawatt solar farm is located on approximately 180 acres in the Reno Technology Park—a 2,200-acre master planned industrial park shared between Apple and Turquoise Solar, who own approximately 1,600 and 600 acres, respectively. The project was recently awarded “Utility-Scale Project of the Year” in Solar Builder’s 2020 Project of the Year awards. Cypress Creek Renewables provides operations and maintenance for the project.

“Turquoise is the largest single operating solar project in the Greenbacker Renewable Energy Company portfolio to date, with many more great projects soon joining it from our construction pipeline…,” said Charles Wheeler, chief executive officer of Greenbacker. “Despite an extremely challenging year across the country, 2020 was a year of growth for us, as we continued to bring amazing new wind and solar projects like this one online. During the year, our total investment income increased by 60 percent reflecting the strong growth we’ve achieved thanks to projects like Turquoise.”

The project, originally developed by Estuary Capital Partners and Sumitomo Corporation of Americas, was purchased by Greenbacker in 2019 for an undisclosed sum.

“Apple is proud that for nearly three years we’ve powered all of our worldwide operations with 100 percent renewable energy,” said Lisa Jackson, Apple’s vice president of environment, policy and social initiatives. “In the process, we’ve charted a course for other companies and organizations to bring clean energy projects to communities around the world and help combat climate change.”

The company noted that construction of the project began in November 2019 and created 236 clean energy construction jobs, with more than 90 percent filled by Nevada residents. It also represented a more than $60 million investment in Washoe County.

In March 2019, Greenbacker closed its public offering of Class A, Class C and Class I shares, as well as its privately offered Class P-A shares. Currently the company privately offers Class P-I shares on a continuous basis. As of September 30, 2020, Greenbacker has made solar, wind, biomass, battery storage, and energy efficiency investments in 27 portfolios, 26 in the United States and one in Canada, as well as six secured loans in the United States.