The Bluerock Total Income+ Real Estate Fund (Tickers: TIPRX, TIPPX, TIPWX, TIPLX), a closed-end interval fund, reported that the fund had delivered an approximate 7.2 percent net total return to shareholders from the trough of the pandemic in late September 2020 through April 2021. The fund also reported a 93.2 percent positive and neutral net return days during the same timeframe.

Bluerock also noted that new capital inflows are up more than 145 percent in April from the third quarter 2020 average monthly capital raise.

Bluerock said that since inception, Class A shares (TIPRX), the fund’s longest running share class, had a net annualized return to shareholders and a total cumulative return of approximately 83 percent, including a 5.25 percent tax-advantaged annual distribution rate with a standard deviation of 1.71 percent, approximately 1/12th the volatility of the S&P 500 over the same time period.

“Notably, while the S&P 500 and Dow Jones Industrial Average incurred a sell-off in Q2 2020 of -33.79 percent and -36.82 percent respectively, the fund’s 2020 net return was never down more than -1.1 percent at any point during the year and delivered a solid fourth quarter to end 2020 with a positive net total return of 1.64 percent (TIPWX: I-share, the fund’s most widely owned share class); the only institutional real estate interval fund to deliver positive returns in 2020,” Bluerock stated.

“The fund’s robust performance since inception and over the past several quarters have been driven by a combination of successful active management, excellence of manager selection, fund selection and sector weighting in its underlying institutional private real estate and debt investments, which led to its strategic allocations to the highest performing sectors – mainly industrial, life sciences, and multifamily”, said Jeffrey Schwaber, chief executive officer of Bluerock Capital Markets. 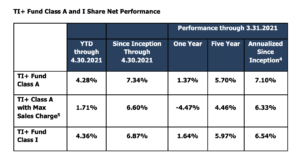 The inception dates of the Class A and Class I shares are October 22, 2012 and April 1, 2014, respectively. The maximum sales charge for Class A shares is 5.75 percent.

As of March 2021, the fund has paid 33 consecutive quarterly distributions to shareholders historically representing an annual distribution rate of 5.25 percent on current net asset value.

The Bluerock Total Income+ Real Estate Fund is a closed-end interval fund that invests the majority of its assets in institutional private equity real estate securities. As of the fourth quarter of 2020, the value of the underlying real estate held by the securities in which the fund is invested is approximately $228 billion, including investments managed by Ares, Blackstone, Morgan Stanley, Principal, PGIM, Clarion Partners, Invesco and RREEF, among others. The minimum investment is $2,500 ($1,000 for retirement plans) for Class A, C, and L shares.